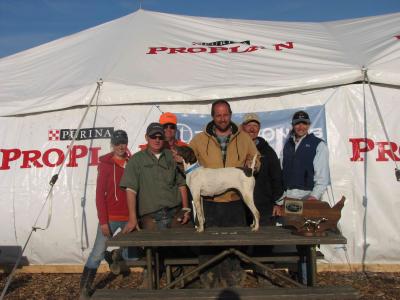 In our third generation of family ownership, Monkeyshine Kennels will teach your dog proper habits while hunting. Our training programs include puppy development, basic gun dog training, field trial training and more. We also provide a wide range of bird species, training your dog to retrieve the birds you're likely to encounter in any corner of the country.

Our training staff is skilled at handling dogs of all obedience levels, including problematic pups. Contact us today and ask about our upcoming trainingÂ camps!!!

Bird dog training that pays off!!! 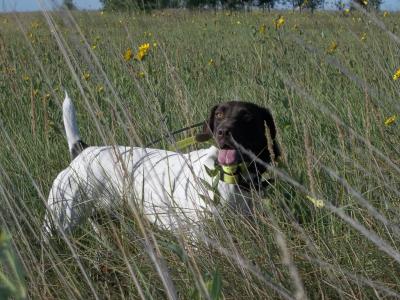 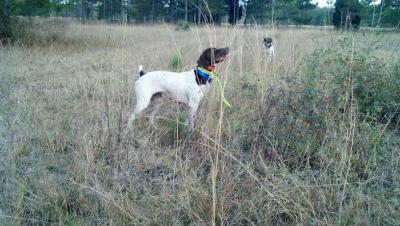 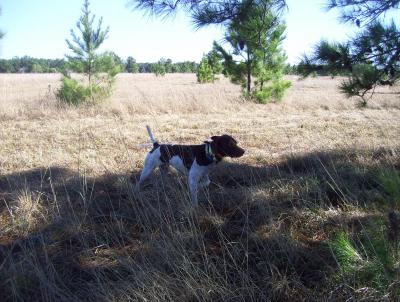 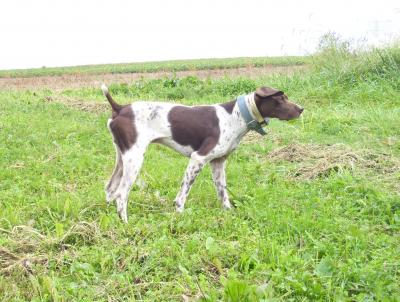 Submitted by: Joe Amatulli on Feb 09, 2014
I've known Dan since he was just an annoying little pup, all I can say is, he has come a very long way. He is truly one of if not the hardest working GSP pro in the country. You can not beat his work ethic and he has something that very few people have, he understands what a dog is saying, he knows how to read a dog.
I am very happy with him and all I can say is I think most people would also be extremely happy with Dan.
Submitted by: Charles Lane on Jan 28, 2014
Dan and April have been training my dog Bubba for the past few years. When they took him on I hoped to do some walking field trials eventually and never thought for a second that he would ever get to the level of the pro dogs on the string. Many times other people into field trial dogs said Bubba was too big or would never be able to hang with the dogs in the hour long trials. Well Dan and April thought otherwise,as they got Bubba into perfect shape, he has 7 points towards his FC title and he ended up running at the GSPCA National Championship! If you want your dog to get to that next level, I highly recommend a summer or winter training program with Monkeyshine Kennels. They treat every dog as if it were their own.
Submitted by: Mark Sullivan on Aug 10, 2013
If you want to bring out the best in your dogs natural abilities send them to Dan at Monkeyshine Kennels. I have had the pleasure of seeing Dan work with his dogs in North Dakota and can not imagine a better experience for teaching dogs how to hunt. This combined with the hard work and experience Dan puts into it makes for a winning combination.
Submitted by: Matt Smith on Jul 08, 2013
I have had dogs with Dan and April for two years now. Dan has done an incredible job at developing my dogs. Dan has incredible knowledge about gundogs and knows when to take the next step to get a dog into the winner circle. He works hard & is honest about your prospect. Thanks for all the hard work.

Matt Smith
Dezasterous Gundogs
Submitted by: Matt Smith on Jul 02, 2013
I have used Dan at Monkeyshine Kennels for the past two years. I started with two dogs and now he has five of my dogs. I have used trainers for the past 56 years & none have gotten more out of a dog than Dan. Dan will tune up my field trial dogs and get them ready for the winners circle, and he also has devolved dogs for me from the age of six months old and I couldn't be happier. I recommend Dan if you want a hard core bird dog that obeys commands.
Submitted by: Scott Wamer on May 31, 2013
Dan has done exceptional work with my GSP (Buck) the past two summers. I would highly recommend Monkey Shine Kennels and the Summer Wild Bird Dog Training Program. Each fall when Buck comes back he is in the best shape of his life.

Thanks Dan and April for the love and patience you have shown with our four legged child.
Submitted by: Fred Ryan on May 28, 2013
I have used Dan at Monkeyshine Kennels for the past 5 to 6 years. I have used trainers for the past 30 years & none have gotten more out of a dog than Dan.
He works at it & is honest about your prospect. His repoir with the dogs is exceptional.
Submitted by: Rob Errigo on May 27, 2013

When I first gave Dan my dog he had issues that prevented him from winning a field trial. After being with Dan and April for a short time, not only did he start winning but became an AKC Field Champion and also won his first NGSPA one hour Championship!

Dan and April are a great team who take really good care of your dogs.