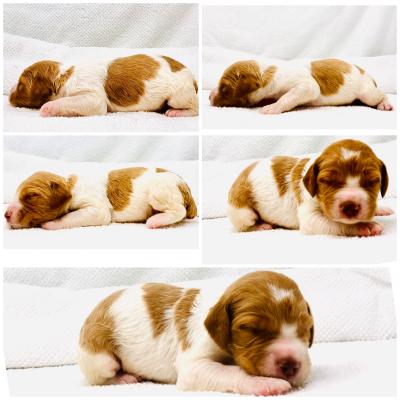 Email Carter Brittany Kennels about this ad.
Introducing "Arrow"
DOB 11/18/2019
Org/White Male
AVAILABLE: $1375
This litter is sired by Kirkland, who has been added to our field competition string and also will be shown in conformation shows.  Kirkland is alert, solid, strong, staunch on point, has a ton of drive and stamina with a nose that is testimony of his fine breeding.  Kirkland is from our much anticipated and decade planned frozen semen litter sired by the legendary 3x National All Age Champion Runner-Up and Hall of Fame Inductee - FC AFC Hi-Scor Jac D'Ruffian.  Kirkland is one of a total of 2 living males sired by this extrordinary athlete who also proved himself as a solid producer of premium quality puppies.  Kirkland's mother is the 2017 National Gun Dog Champion Runner-up and National Perpetuator's Misty Skye Award Winner - FC AFC Emma Tayshon - who also has additional national awards and championship wins/placements.  Emma also brings forth an incredbily strong line of legendary dogs.  Emma is sired by the legendary Hall of Fame Inductee 2xNFC NAFC FC AFC Just Call Me Roy who is the only 3x winner of the National All Age Championship and has more national all-age awards and placements than any dog in Brittany breed history.

The dam of this litter, Carter's Sundance Lady, was whelped by FC AFC Gunn's-A-Blaz'n - who won the 2016 Southern Open Brittany Showdown Classic and has earned her AKC Field Champion title through her field competitiveness.  FC Gunn's-A-Blaz'n (Annie) was whelped by Shady's Blaze of Glory who is the daughter of 1983 National All Age Champion and Brittany Hall of Fame inductee NFC FC AFC Bean's Blaze HOF and Hall of Fame Inductee FC AFC Shady's Chik-N-Little HOF - two of the Brittany breeds most influential producers.  FC AFC Gunn's-A-Blaz'n is sired by the legendary NGDC NAGDC FC AFC Peter Gunn, who made Brittany breed history in 2009 as being the first dog to hold both the National Open and the National Amateur Gun Dog Championship titles.  He was also awarded the National 2010 Magnum's Masked Man award for having the highest amount of gun dog field trial wins/points of any dog in the country.  Peter Gunn made history again in 2012 by winning the National Tri Tronic's Top Shooting Dog Award and becoming the first dog in the history of the breed to have been awarded every National Gun Dog/Shooting Dog Title and Award provided.  He remains one of the top performance Brittany gun dogs of all times and to date, he remains the only dog to have ever been awarded every national gun dog title and award.

We are a veterinarian owned/operated kennel.  All puppies come with a 26 month health guarantee against congenital health issues.  If you are interested in reserving a puppy (or) if you would like more information please visit our website for full details under the puppy menu (best viewed on computer or tablet): www.carterbrittanykennels.com.  Our website has the complete 5 generation pedigree and high quality photos of puppies. To reserve please contact Drew Carter 912-389-6262 or carterbritts@icloud.com